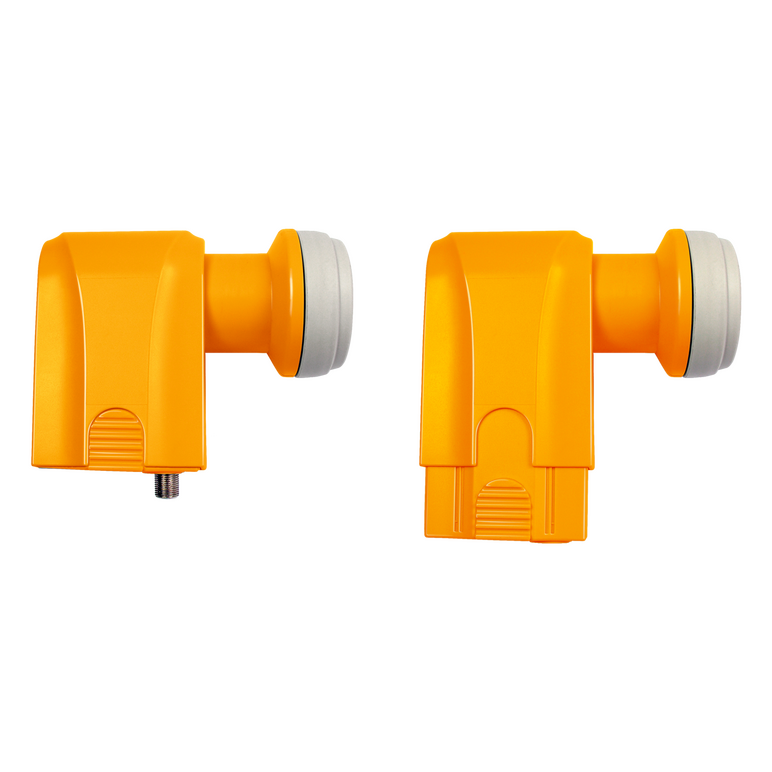 LNB with dCSS Technology for Offset satellite dishes
In stock
0.00
0.00 out of 5 stars
(0 reviews) Write a review
Coming soon
Too late item already sold Compare
+ −
Buy Now Compare
Please sign in so that we can notify you about a reply
Description Reviews

what is dCSS technology?

dCSS technology is the evolution of the SCR technology, which characteristics are described below:

The SCR technology (Satellite Channel Router) allows full distribution of one or several satellite signals to multiple users over a single coaxial cable.
The relevant aspect here is the suppression of the multiple cables required to support the new reception devices; this is achieved by means of a static or dynamic user band assignment and the use of DiseQc commands for satellite signal tuning.

A historical note: the SCR standard (EN50494) was defined in 2007. Based on the analogue concept, this technology considered the use of up to 8 user bands (User Bands) in the satellite IF band (950 MHz-2150 MHz). Each band is assigned a user tuner, and on each any input band and polarity can be selected using frequency processing.

Later, the dCSS technology (Digital Channel Stacking Switch), based on the EN50607 standard, introduces significant improvements, such as the increase in the number of satellites to be distributed, or the possibility to use 32 user bands in a single cable, which is almost equivalent to occupying the whole satellite band. Furthermore, the dCSS technology is backwards compatible with SCR.

The dCSS technology can be used in multiple scenarios (individual and communal distribution), and in dynamic or static operation modes. The latter is the most flexible and inexpensive alternative to the headends with intermediate frequency processing that came along with early analogue and digital satellite distributions.
Likewise, the dCSS technology can be combined with optical fibre, which significantly extends the reach of the satellite distribution.

In short, the dCSS Technology is quite a step forward in the distribution of satellite signals over a single coaxial cable, and it will make for the mass introduction of the new reception devices in homes; devices such as Home Gateways or PVR, the big bet of satellite operators in the short and medium terms.

More items from us

Happy Customers
We understand that our success depends on customer satisfaction. We always apply all the rules of distance selling and we always listen to all requests.
Premium Vendors
We have an extensive catalog of items and we and selected sellers are committed to providing quality products and meeting delivery times
Your Secure Marketplace
For payments by credit card, transactions are managed by Paypal on their servers in a secure way and without sharing sensitive data with us.
Buy or Sell Anything
You can buy as a private user or company but if you are a European VAT number holder you can decide to sell and make your items available to our customers and turn them into cash.

Tectron the first e-commerce active in Italy, the tectron.it domain was registered on June 27, 2000 before any other world marketplace.
Our brand is known all over the world (we boast numerous imitation attempts) and have successfully delivered tens of thousands of products all over the world. For some years we have been giving the possibility to a selected choice of retailers to propose their articles on our portal but always with our supervision.